Case Study – Gala Opening of THE BEACH an outdoor life style venue. I was contacted by an International Property Developer Meraas – Dubai Based Holding Company. They were creating a destination with a host of outdoor activities, fitness facilities, retail stores, Cineplex, restaurants, ‘The Market’ an outdoor artisanal bazaar, seaside leisure and ‘Splash Pad’, a play-area for kids – a meeting place for community. 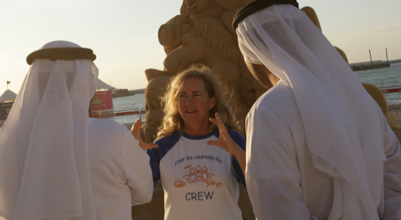 The Task was to create a Sand Sculpture Event for the launch. Our aim was to generate international and local media buzz to encourage local community to come to visit and enjoy the location. The display needed to last three- four mounts and be family friendly whilst catering to a large demographic, promoting both Dubai and beach side activities.

The 300,000 square feet complex was still under contraction. The feature sand display would be made as the contractors were finishing the project.

The Vision; Working with the client we designed a “vison sketch” for the feature sculpture. It highlighted the buildings and skyline of Dubai. The vision also, included Sheikh Zayed road the train station, train, and logos. The sculpture also included lighting design with lights inside the windows of the buildings and on the outside of the work. 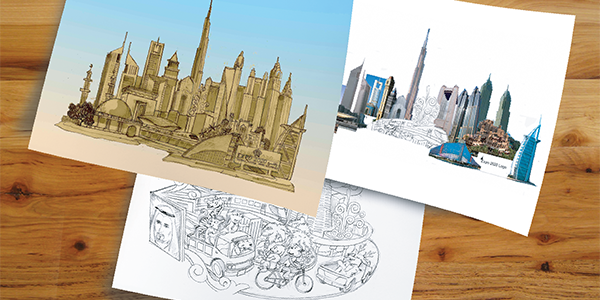 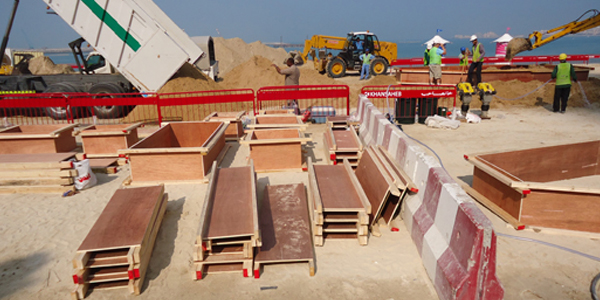 Build the Park; Formwork was made and assembled on site. Thirteen truckloads of sand were delivered, one JCB crane, two sand tampers and a bobcat were all used in the pound-up. Two sand engineers, three carpenters, six labourers and a lot of water.
Sand Pile; The constructed or pound-up took three days. This is where we compact the sand and water in formwork boxes preparing the pile to be carved. This was done during the final building phase of the Mall complex. We worked alongside the other contractors and engineers who were finishing work in preparation for the opening date. 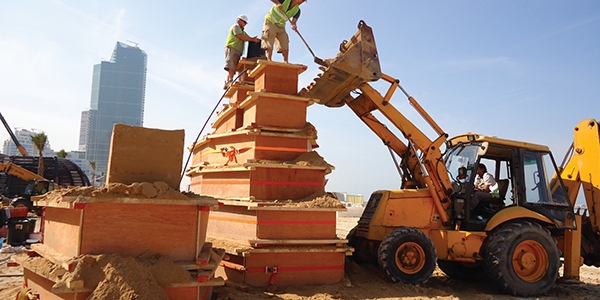 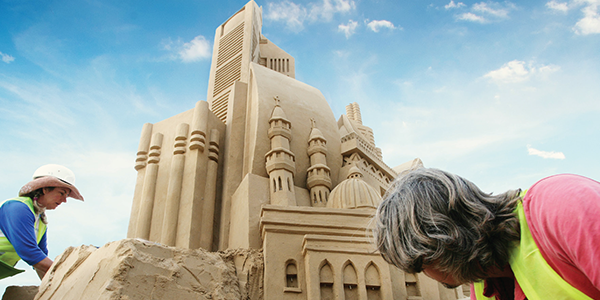 Carving the Pile; I sourced the best international sand sculptors who carved the pile of sand and turned it into a work of art. The carving time took ten days. Lighting and special features where installed during the carving process and the lights were turned on at night. The 360 degrees’ sand sculpture was delivered on time, it included logos on both sides.
Media Magnet; The sand sculpture was photographed and sent out on social media more than 10,000 times. The event drew International Press with the sculpture featuring in newspapers articles, blogs, editorials around the world. The work was shown in magazines, inflight magazines and featured on life style and tourist television shows worldwide. Oprah.com magazine featured an interview with Jennifer Rossen, a story with THE BEACH sculpture picture. 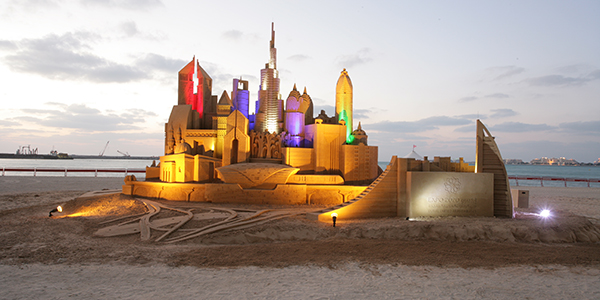 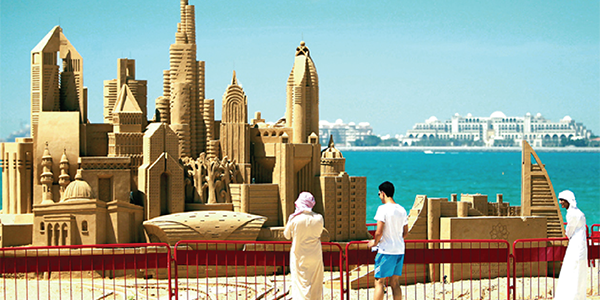 Attracting Crowds; The stunning Sand Sculpture was very popular with local people and tourists, it drew huge crowds. The promotion was so successful the client kept the sculpture up for extended period, the display was up for more than eleven mounts. Due to the popularity of the event a further three sculpture events where commissioned.